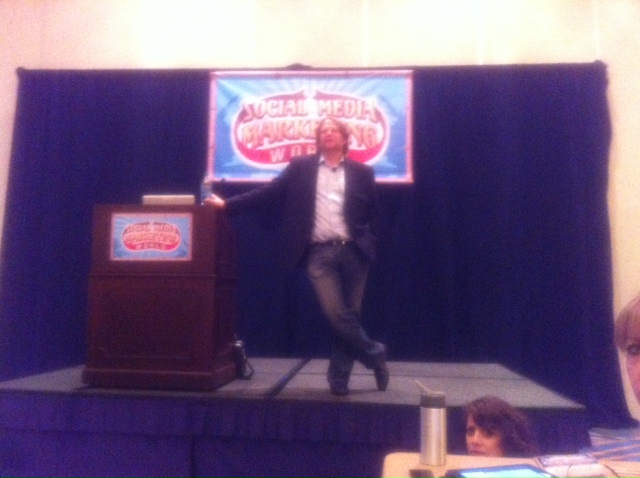 This is the first summary of the second day at Social Media Marketing World 2013, recalling the most important points of the talk given by Chris Brogan. I’ll dedicate a whole post to this speech because it deserves it.

Chris Brogan: You’re not going to like this but social media isn’t the answer

This is probably the reason why I came to this event; being able to see the person who’s inspired me since my first day working in new media back in 2007: Chris Brogan. I remember his was the first blog I subscribed to and the first person I followed on Twitter. Since then, I’ve tried to read all his posts, every day, keeping also those I’ve been unable to reed (I have approximately 1,500 emails containing his daily posts.)

Chris is probably the most respected person in the Social Web. This is something you notice when you share a round-table conference with him and other professionals as important as Jay Baer or Mario Sundar tell the audience, “I want to be like Chris Brogan”. He went straight to the point and touched on topics and concepts that no one else talked about during the event. He explained techniques and uses, sharing his knowledge in great detail and depth.

He talks with self-assurance about what he does, sharing useful and valuable reflections with the audience. As the audience, you realise you’re seeing someone who is capable of changing everything. These are the most relevant points I extracted from Chris Brogan’s speech:

How to control your digital channel

During the Q&A after his speech, I wanted to ask Chris a question: “Chris, what’s your competitive advantage, besides your email subscription base?”. This was his answer: “The speed and skill with which I create content that is helpful and useful.” His answer speaks for itself.

I was shocked when before I had time to introduce myself to ask the question, Chris said “My dear friend Isra García, thanks for being here”. That’s what I keep talking about when I refer to Human Media. However, what really grabbed me about meeting Chris Brogan in person was his honesty, humility, clarity and his commitment to giving the best of himself.

After the talk I wanted to greet him and I realised that he really puts his money where his mouth is: when I was going to shake his hand, instead, he gave me a big great hug, saying “We finally meet, it’s such an honour to meet you after such a long time. Thanks for being there always and thanks for reading me!” (This is what I was supposed to have told him, not the other way round! I did get to say it back though.)

He commits to his readers fully. He understands where the value of his brand is, what he does. And where the money in his bank account comes from. Undoubtedly, attending #SMMW13 has been worth it just by listening to and meeting Chris Brogan, as well as Guy Kawasaki.

However, another of the reasons to attend was to travel Route 66 and end up at Coachella, but that’s another story… and perhaps a post.