In fact, the study by Chadwick Martin Bailey and iModerate Research Technologies found that consumers are 67% more likely to buy from the brands they follow on Twitter, and 51% more likely to buy from a brand they follow on Facebook (Mashable source), showing clearly, that the Social Media phenomena profoundly influence the audience. What about the breathtaking amount of 3 millions of tweets/day? Another breaking fact is, that Facebook’s official company statistics outline that there’re 400 million active users all over the world and continues spreading at the light of speed (mashable’s source) Analyzing the impact of Social Media in our environment, give us an overall idea that something is happening in the way that communication used to happen.

Due to the rapid adoption of Social Media Marketing as a significant communication integration medium, it’s necessary to consider how the social interaction has affected the communication process.

The exposure, feedback, engagement (connecting) and exchange (sharing) that Social Media platforms provide, creates significant changes in the traditional communication understanding. Essentially, information flow it is no longer considered a “one-way street.” A way in which the audience received messages through the “I communicate – you receive” mantra. Instead, Social Media integration is seen as an interactive process that enables same-level information exchange among the audience and the brand. Creating a long-lasting feedback communication process and giving to the brand a total engagement relationship.

The process for the social media integration model works as it follows: 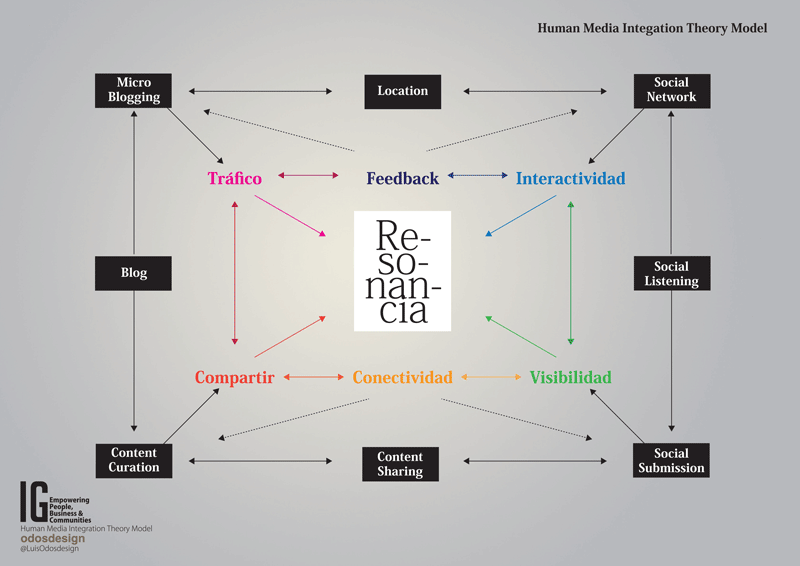 Social bookmarking sites place content (such as blogs or web pages)  into an active eco-system that allows social media interaction such as Twitter or Facebook. This content is then shared and spread virally through the connections made from interaction on the social media eco-system. It refers to people being linked to people through common groups, associations, interests, etc.  Since this becomes the “six degrees” of separation, this interaction causes the viral effect.

This social media platform allows the interaction and the ability of the model to flow and become organic. Then, the social networking platforms enable the connection with the public through the engagement approach. It is caused by the “two-way street” interaction process, linked to the social bookmarking sharing perspective. At the same time, while the driving forces of one side are acting and creating communication. The driving forces of the other hand, such as social recommendation/reviews, measure the impact of the information.

Thus, canalizing the conversation created by the outgoing network, and turning it into a valuable feedback experience and exposure reach effect. Which melts in the same process as the conceptualization of the blogging platforms, harnessing the power of its SEO and highly page rank properties to deliver the most effective exposure impact (giving feedback, engaging and sharing information all at once)

What is your take on the social media integration model? Does this make sense to you? I’d like to hear your thoughts…